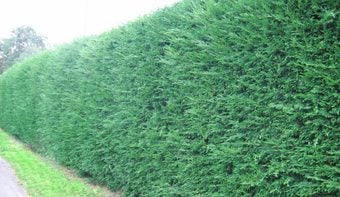 Heart and lung disease are Britain’s biggest killers and air pollution is one of the main causes.  Planting trees and hedges in urban areas can filter out significant amounts of particulates and help reduce the risk.  Although all trees and hedges have a reduction effect on air pollution, Leylandii was shown to be the best filter of particulates according to a study from the Universities of Southampton and Sussex.

Air pollution is always in the news with particulates and nitrogen dioxide some of the main problems in the UK. Air pollution contributes to million deaths each year worldwide according to a World Health Organisation report – more than traffic accidents. Even in the UK, a government report in 2011, suggested that 29,000 people in Britain die each year as a result of breathing in particulate matter (PM) or soot mainly produced by diesel engines. Dr Michael Moseley’s TV programme explained that the particulate matter is too small to be filtered out by our noses and is taken down into our lungs where it can stress and damage the lining of the lungs. Even more importantly, they also showed that breathing in air pollution increased blood pressure and made arteries smaller meaning the body is less able to respond to stress and this increased the risk of a heart attack. According to Moseley, heart disease is Britain’s biggest killer. Now people often worry about the miniscule amounts of pesticide residue in food and water, yet there is no evidence that organic food is healthier than conventionally grown food. It seems what we should be more worried about is the dirty air we breathe if we live near a road or in urban areas. However, there is something simple we can do about it – plant trees or hedges.

Professor Maher from Lancaster University has shown that the rough and hairy structure of birch (Betula spp.) leaves make them good at capturing particulate matter (PM).  However, in 2000, Beckett, Freer-Smith and Taylor’s research at The University of Sussex and The University of Southampton showed that conifers, in particular, Cupressocyparis leylandii, were 40% better at capturing particulate matter than the native trees tested due to the ‘finer, more complex structure of their foliage’. Combine this with the fact that they are evergreen and so they have leaves for about 5 months longer than a deciduous tree and they are much more effective at filtering out air pollution.

In the TV programme , Trust Me, I’m A Doctor, a family of two parents and one child was monitored for air pollution intake. The child was exposed to twice as much air pollution as her mother particularly on her trip to and from school and while playing at school. Now, it is important for children to go out and play at school but the exposure to particulates could be damaging their health. Planting trees or a hedge may be the answer. The team installed a row of Silver Birch trees along a street in Lancaster to see if they made a difference to the atmosphere. They measured the level of particulate matter in four houses with and four houses without trees in front of them over two weeks. The four houses with trees had a 50-60% reduction in particulate matter. Now, this is just a small trial but the results are very interesting. Planting a conifer hedge would filter out even more pollution and for 12 rather than 7 months of the year.  A well-maintained Leylandii hedge would not only filter out particulates but also reduces noise.  Thuja plicata (Western Red Cedar) forms a similar dense hedge. If you want something with less maintenance, then the dense foliage of Thuja ‘Emerald’ (aka Thuja occidentalis ‘Smaragd’) would also do a good job. Perhaps all schools should have a conifer hedge planted along roadsides.  We sold some to a school last week, maybe they had already seen the research.